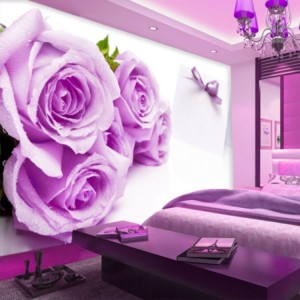 Wall covering
It is mounted on the wall for a decorative paste special “paper” and “cloth”, it is a common architectural interior wall decoration materials. In late 1400, wallpaper birthplace of the earliest in France, originally used instead of expensive tapestries, and later spread to Europe. In the late 16th century, the emergence of hand-painted wallpaper. 1839, printed wallpaper appeared in Britain, after the industrialized countries produce a wide range of applications. Around 1880, China began to spread the wallpaper, but it was more in the house Concession use. Volume Printing made in China, the paper embossed wallpaper and PVC composite synchronization is built in 1978 by the Beijing Su Chang (ie Beijing Te Puli decorative finishing Material Co., Ltd.) produced.

With the demand and raise awareness of the high-end decorative materials technology level, but also on the basis of wallpaper design and production of special cloth wall covering products, the market has been widely used customer. Wall covering products available so that the wall decoration materials and adding new products.

About AD 4,000 years ago, ancient Egyptians began to use papyrus (author note: one or marrow stem from reeds made of writing material).

Initial application of wallpaper have to go back in ancient China. There are two reasons. First, the paper was originally invented by the Chinese. Secondly, according to historical records, in 200 BC Chinese people had already started to use rice paper to decorate the wall.
In 1481, French King Louis XI had ordered JeanBourdichon artist painted 50 rolls blue background angel pattern wallpaper. Because the king is like to live in different castle, and he hopes he can move when the “wall” is also be removed. In addition. There are also historical records say, the Middle Ages wealthy Europeans commissioned artists to paint on paper to decorate the walls. But before the printing press was invented, the wallpaper in the true sense does not exist.
Britain retains the oldest existing European wallpaper debris. Identified, UK Christ’s College Tour

Wall covering
Wallpaper debris left column printed on museum in the year 1509. This is an Italian-style pomegranate pattern wallpaper, printed on the back of a declaration issued by Henry VIII. Ge is a man named Hugo Division Yorkshire printers masterpiece.
In 1599, the first branch wallpaper pasting workers guild was established in France. French sculptor Jean-MichelPapillon in 1675 started with woodcut printed flower wallpaper, modern wallpaper in the true sense of the beginning of the birth. Jean-MichelPapillon post has since been known as the father of the wallpaper.

The earliest extant flocked wallpaper samples from Worcestershire, UK, according to research these wallpaper made in 1680. British manufacturing technology R & D wallpaper significance. 18th century, made by London wallpaper out of the factory were all the rage. Initially, stylish Londoners ordered expensive marble or stucco pattern paper hand-painted to decorate their homes. Wallpaper with its unique charm has won the Londoners of all ages. There are fringed with matching wallpaper or Chuihua lace pattern, like trimmed velvet flocked wallpaper is abnormal popular.